Solar panels in the north of the Netherlands

The knowledge platform in the Northern Netherlands

Yield in kWh per Wp per year in the Northern Netherlands 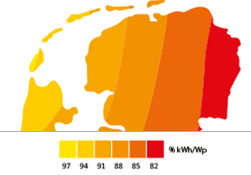 The most standard solar panel at the moment is the 280 Wp. per panel of 1.65 x 1 meter wide. Under laboratory conditions this panel produces 280 kWh. However, in practice, these conditions are never achieved and we use a conversion factor to arrive at the actual yield of solar panels. This efficiency depends on many factors including the location of the solar panels in the Netherlands.

Growth in solar power in the Netherlands and the north

Groningen solar panels have a capacity of 202,023 kW, the Frisian panels 172,592 kW and the Drenthe solar panels have a total capacity of 158,695 kW. So you can see that the capacity of solar power systems is increasing faster than the number of installations. In other words, the systems or solar parks are getting bigger or more panels are being used with a higher capacity. This trend will continue in the years to come, given the increase in the number of Wp per solar panel.

The following projects have recently been installed in the northern Netherlands

Peter Kuil’s company has made a considerable contribution by making its roof available free of charge to EC Noorddijk for the installation of 644 solar panels.

The purpose of the cooperative is to generate energy sustainably, but also to devise measures together to save energy.

The factory of VDM Woningen will soon be covered with no less than 3,100 solar panels. ANS Installations will take care of the installation.

In the VDM factory in Drogeham the walls, floors and roofs are being constructed and prefabricated. The roof will be fitted with solar panels using the SDE+ subsidy.

Henk Bol, Bol ICT: "On our way to energy label A!

An office located in a former stable, built in 1965, which thanks to measures taken already meets energy label C: a great achievement by Bol ICT. Henk Bol, owner of this ICT company on Noorddijkerweg, is enthusiastic about the result. “Especially the replacement of the lighting with LED is really a huge improvement in light output.”

For Henk Bol, the possible legal obligation that every office larger than 100m2 must have at least energy label C by 2023 was not the primary reason for the measures taken. “One of my personal annoyances was that some lights were left on when no one was working. I wanted to do something about that. And we were in dire need of a new climate system. That prompted me to do it all right from the start: indoor climate, lighting and soundproofing.”

On the roof of Terwolde Groningen and Nefkens Noord, 1,800 solar panels will be installed. The installation on the joint premises is done by Beter Duurzaam.

The building is located at the Euvelgunne junction on the Driebond industrial estate. The entire power supply will be done by the solar panels. Furthermore, there are also heat pumps installed.

Energiecoperatie Terschelling Energie has realised the first solar park. The park has over 1.500 solar panels, providing a total of 400.00 kWh of electricity. Groenleven has installed the solar panels.

Approximately 120 households can be provided for. Terschelling Energie aims to make the island more sustainable. “Of the energy that we all use we want to generate as much as possible ourselves”.

The building of the Energy Academy Europe in Groningen must be as energy efficient as possible. As part of this, the EAE has solar panels on the roof that have been placed in a triangular arrangement.

Just recently, the former UN Secretary General performed the opening of the UN Global Center on Adaptation in the education building.

We have listed subsidy opportunities and low-cost loans for residents of Groningen, Friesland and Drenthe, conveniently sorted by province. You can find them here https://www.zonnepanelenplanet.nl/subsidie/