You already knew that the sun in the Netherlands does not shine all year round. However, Solar panels also provide power when it is cloudy. Because of the low price of solar panels, the power from solar panels is cheap and the return is excellent. On average, the payback period of your investment in solar panels is 7 years while they produce power for at least 25 years.

With a south-facing roof, you can generate 150 kWh per m2 of solar electricity annually. The yield of a roof facing east or west is still 125 kWh per m2. The dimensions of a solar panel are usually 1.65 x 1 meter. The capacity per solar panel is currently 280 Wp on average.

Yield of solar panels in kWh per year calculation

The most standard solar panel is currently the 280 Wp. per panel measuring 1.65 x 1 meter. Under laboratory conditions this panel produces 280 kWh. However, in practice, these conditions are never achieved and we use a conversion factor to arrive at the actual yield of solar panels. 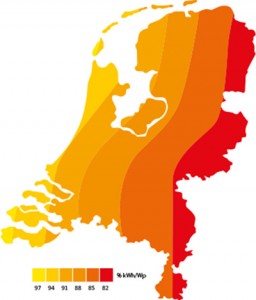 The yield in kWh per Wp per year depends on many factors. Below are the main factors that determine the efficiency of your solar panels.

Location of the roof

One of the most important factors on the yield is the location of the roof. Preferably, the roof should face south. However, since the prices of solar panels have dropped, solar panels are also placed on east and west. Also because these panels often require less powerful inverters, the cost of these systems is also lower.

Reduction of power and yield

The yield in Euros is calculated by multiplying the yield in kWh by the electricity price. Currently, a kWh of electricity costs 21.5 Euro cents. So if you have a system of 2700 KWh per year, you save over 580 Euros per year.

Increase your return on solar panels through VAT refunds

To increase your return on solar panels even further, since November 2013 you as a private individual can reclaim the VAT on the solar panel installation. The idea behind this is that you actually have a small energy company and, by feeding back the power to the grid, you are actually an entrepreneur. That saves 21% on your investment in solar panels. To do this you register with the tax authorities as a starting entrepreneur.

The tax authorities will give you a VAT number and login details for online declaration. When you have realized your deduction you sign out again as entrepreneur with the tax authorities. Note, this only works if you are not a large VAT entrepreneur and eligible for the Small Business Scheme.

Alternatively, you can put the solar panels in your partner’s name if you are already a VAT entrepreneur and no longer eligible for the Small Business Scheme. A number of solar panel suppliers provide this service free with the purchase of the solar panels. Others have a step-by-step plan to help you with this.

Yield of solar panels through a power guarantee

Although most solar panels nowadays have a dirt-resistant coating, dust and bird droppings are not exactly conducive to a good yield. So clean your solar panels several times a year to keep an optimal yield. It seems that one blob of bird droppings reduces the yield by several percent.

Do not use abrasives when cleaning as they are disastrous for future light penetration. Use of a pressure washer is also out of the question. Soft tap water or rain water combined with a soft brush or sponge is best. Pay particular attention to the lower half of the solar modules, where dirt collects and accumulates. Especially with vertically mounted solar panels, the yield is significantly reduced.

If you have the opportunity to produce more electricity than you use yourself, a high feed-in compensation is an interesting way to increase the output of your solar panels. Due to the strong demand for green power we see rising prices for ‘surplus’ green power. Our research at the beginning of 2020 shows that this feed-in compensation varies widely among power suppliers.

The highest bidder at the time of writing is Pure Energy who gives as much as 14.52 cents per kWh of electricity delivered back. Your yield from solar panels is thus substantially increased. Compare that with parties who only pay the bare electricity price excluding VAT and energy tax. Depending on your power contract, these amounts are around 6.5 and 7 cents per kWh. Other parties offer only 5 cents per kWh or even less.

As a private individual, the feed-in compensation including VAT is the most interesting. Pay attention to how much extra electricity is reimbursed at the rate offered. At Pure energie they limit the feed-in tariff to 1500 kWh. The more is rewarded with the regular electricity tariff which is considerably lower. Other suppliers give a lower fee but at Greenchoice, for example, you can feed back up to 10,000 kWh. You can optimize your output of solar panels by making the right choices.

Yield of solar panels in relation to the cost price

The cost price of the electricity you produce depends very much on how many solar panels you have bought at once and when. Solar panels are still getting cheaper and the one who has purchased a serious surface of solar panels (read: 100 + panels) can produce the power for about 5 to 6 cents per kWh. A profitable business, although I realize that the average private person probably has to deal with a higher cost price. Maybe at the current price level this can also be done in your situation. Just ask here for quotations without obligation! Good calculations in combination with the highest feed-in tariff gives the best yield solar panels.

Good research can therefore pay off. For the most current feed-in compensation is www.energievergelijk.nl a convenient source.