A number of companies are going to build the first floating solar panels at sea together with knowledge institutions. 15 kilometers off the coast of Scheveningen, they are going to work for the next three years on a pilot project with solar panels on an area of 500 square meters.

This project is receiving support from the Ministry of Economic Affairs and Climate Change because it is interesting for the Netherlands from several points of view. The initiators of the project envision a future of “solar farms” between the wind farms in the North Sea, so that even more renewable energy can be generated there.

The above photo is of the floating solar panels in Groningen. Since June 2017, this spot marks the northern city entrance to the city. These solar panels have a higher than average efficiency. The main difference is in the assembly and the material of this. A ‘floating float’ is placed on water, which serves as a solid surface. The system also meets strict requirements, as this is necessary because of the weather conditions that can be stronger on the water than on land. Also, due to the cooling of the water, a higher efficiency is achieved compared to a traditional system.

According to the results of the study, as described in the journal Progress in Photovoltaics, “Floating solar panels at sea outperform panels on land by an average of nearly 13% annually. And in some months even 18%. The difference lies in the lower temperatures at sea and less cloud cover.” The researchers calculated the yield for both the situation at sea and on land. 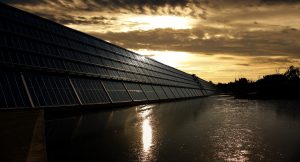 Floating solar panels at sea have many advantages. They do not take up scarce space at sea and at sea the yield is about 15% higher than on land. This is because the sun shines more at sea and the light is reflected between clouds and water. In addition, the floating solar panels remain cooler due to the temperature of the water, so the yield is better. Moreover, more than 50% of the world’s population lives within 100 km of a coast.

The share of solar energy in electricity production is increasing rapidly. In 2018, solar power still accounted for 2.4%. By 2025, it is predicted to reach a 22% share. But in the construction of solar parks you quickly encounter limited availability of land and damage to nature. All these disadvantages do not play a role at sea.

However, the sea also has its disadvantages. In the form of waves, strong winds, and the lack of solid ground. But these are problems that the Dutch offshore industry has solutions for;

.
The participants in this project are: Energieonderzoek Centrum Nederland (ECN), TNO, Maritiem Research Instituut Nederland (MARIN), Utrecht University and energy company TAQA from the United Arab Emirates. Initiator is the company Oceans of Energy from Leiden. Director Allard van Hoeken of Oceans of Energy says “What we are going to do here is special and has never been done before. Solar farms have already been placed on inland waterways, but this has never been done before at sea.”.

The computer simulation of solar panels at sea is special because there is little experimental and theoretical material at all about floating solar panels. “For the study, we constructed a computer model of 12 floating panels. As a second phase in this project, we are going to investigate how a test setup at sea performs in practice and whether the conditions play a role. We are doing all this in cooperation with Oceans of Energy, a Dutch company that has been operating successfully at sea since November last year. The yield results of Oceans of Energy will be compared with the results of our computer model,” said Professor Wilfried van Sark, a committed researcher. The pilot project with solar panels at sea will cost 2 million euros. This includes a subsidy of 1.4 million from the Ministry. In addition to concrete interest from the company TAQA, there is also interest from Southeast Asia. According to the inventors, the concept is ideal for islands and remote locations worldwide. The money for this study comes from the government’s top sector policy TKI Urban Energy. This part of the top sector policy has now set up more than 450 innovative projects in the field of solar energy, saving CO2 and smart ICT solutions. Ultimately with the goal of achieving a CO2-free built environment by 2050.

The roof of the Amercentrake was already equipped with over 2,000 solar panels a few years ago. Now there will be a complete floating solar meadow of 6.1 megawatt peak. In addition, the Amer power plant also started the construction of a solar park of 2.3 megawatt peak, this park will be ground mounted.

It is expected that the construction of the floating solar panels will start in early August 2021, after which the floating solar park can be used at the end of the year 2021. The construction of the ground-mounted solar panels is expected to be commissioned from the end of August. The power that will be generated by the solar farm is equivalent to the annual electricity consumption of approximately 2,300 Dutch families.

‘Our first floating solar project demonstrates our continued commitment to contribute to the energy transition with innovative technologies and a sustainable energy supply. As a company, we also contribute to hydrogen developments through the NortH2, Eemshydrogen and FUREC projects. Both new PV projects show that we can transform conventional production sites into sites with innovative solutions that contribute to making the electricity system more sustainable. Says Roger Miesen, Chief executive officer of RWE Generation and country chair for the Netherlands.

The Netherlands is one of RWE’s strategic markets, according to top executive Rogier Miesen, and the company wants to continue to contribute to the growth of renewable energy. The company is expanding its Dutch portfolio with a solar farm and four new wind farms.